Bebo as a kid had come to visit one of Bachchan's movie sets.

New Delhi: Giving his fans a glimpse of Kareena Kapoor Khan from her childhood, Amitabh Bachchan shared an old picture of him and Kareena together, which is probably the best thing on the Internet right now.

Taking his fans down the memory lane, Big B shared the monochrome picture on his Instagram and wrote, “Guess who .. ? That be Kareena Kapoor on the sets of PUKAR shooting in Goa .. had come with Dad Randhir .. hurt her foot .. and yours truly putting medication and taping it !!.”

In the throwback picture, Amitabh can be seen applying balm on the injured foot of the Heroine actor.

The chubby little Kareena is winning fans’ hearts with her innocence and cuteness. 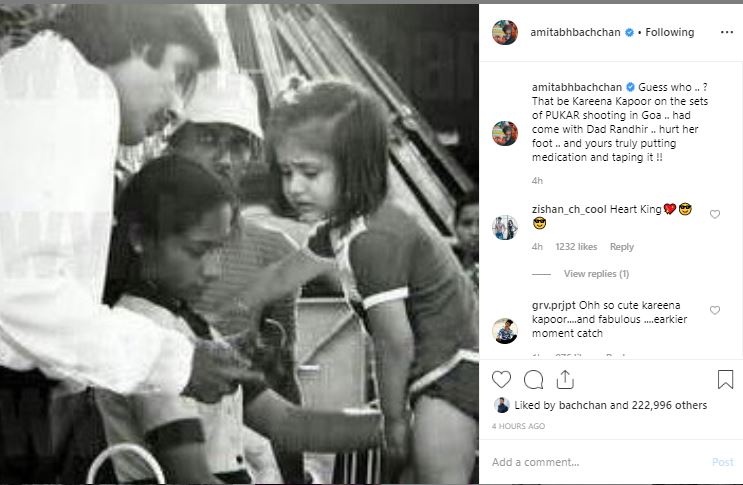 Earlier on May 17, Amitabh also posted an old picture on his Twitter handle with Thomas Xavier, who was the DOP assistant for his film Main Azaad Hoon. “Time warp .. then and now !! Then DOP asst., on the film ‘Main Azaad Hoon’ shoot of song ‘itne baazu..’ in Goa .. Now DOP asst ., on film ‘Chehre’ shoot .. SAME GUYS .. HE AND ME ..! some hair has been lost .. some grown ..,” he captioned the post.

In the picture, Amitabh can be seen striking a perfect pose with Thomas. The second picture of Big B is in makeup from the sets of the film Chehre, where he is working with Thomas again. It seems that the duo is working together after a gap of almost 30 years. 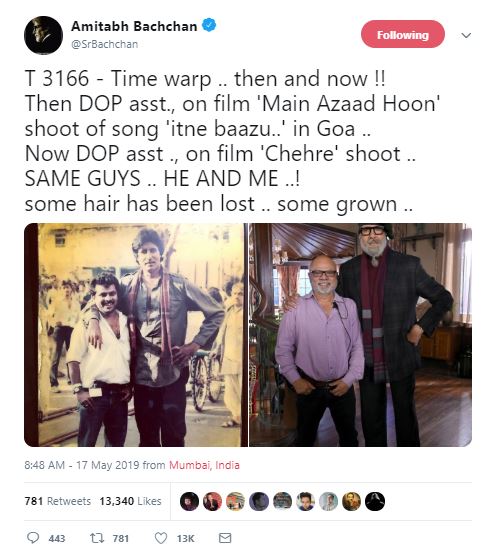 Shabana Azmi was quick to respond to Amitabh’s tweet, and wrote: “I’ve known Thomas Xavier since he was a young lad and he remains essentially the same uncomplicated person.” 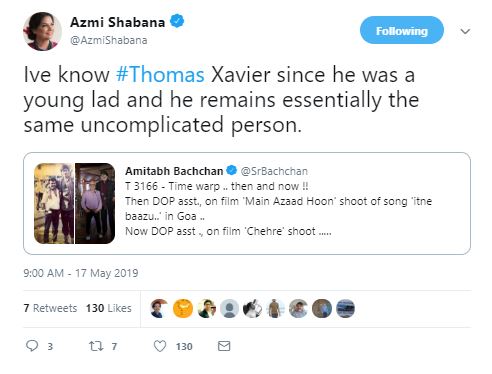 Bollywood’s ‘Shahenshah’ and Emraan Hashmi are coming together for the first time in the Rumi Jaffery directorial Chehre.

Chehre is being produced by Anand Pandit Motion Pictures and Saraswati Entertainment Pvt Ltd. The film is scheduled to hit the screens on February 21, 2020.

Big B will be next seen in Ayan Mukerji’s Brahmastra, alongside Alia Bhatt and Ranbir Kapoor. He is also set to make his Tamil debut with a bilingual film Uyarndha Manithan, titled Tera Yaar Hoon Main in Hindi.