Farhan Akhtar and Abhay Deol took to Instagram to look back in nostalgia.

New Delhi: One of the Bollywood’s most-loved films, ‘Zindagi Na Milegi Dobara’, clocked eight years of its release on July 15, and to make the celebrations more special, Farhan Akhtar penned a quirky note.

Farhan shared the poster of the film on his Instagram to send love to ‘the people who made it possible’. Taking a trip down memory lane, the actor wrote: “8 years since Bagwati moved on .. but I guess the life has to the move ons the somehow… Love to all amigos and amigas .. you who made the film possible and you who made the film a success in more ways than just box office can quantify. Lots of love and a big hug.” 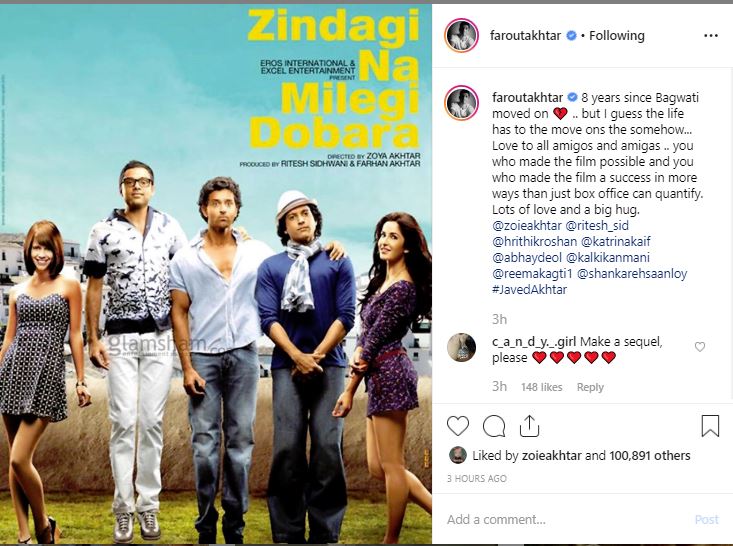 The film, which had an ensemble cast including Hrithik Roshan, Abhay Deol, Farhan, Katrina Kaif and Kalki Koechlin, instantly hit the box office and is still remembered for its pace, adventure and liveliness.

The story of the film revolves around the life of three childhood friends — Arjun (Hrithik), Kabir (Abhay) and Imraan (Farhan) — who revive their good old days by planning an adventurous trip before Kabir’s marriage.

The film is also known for its picturesque landscapes, amazing destinations, and the very special ‘La Tomatina,’ a fun festival held in Spain in which the actors were seen throwing tomatoes on each other.

Apart from Farhan, Abhay also penned a note on the occasion. “It’s been 8 years since I made this film. It’s the one movie that had people come up to me and say, “I saw this and I quit my job” or, “I saw this and made peace with an old friend,” to “I took a break from work” and even, “I got a divorce!” It inspired people to follow their dreams, to take action, to accept who and where they are. I couldn’t ask for more! It was an honour and a privilege to work with you Zoya Akhtar,” he wrote alongside a still from the film.

The film was helmed by Zoya Akhtar and produced by Farhan and Ritesh Sidhwani under Excel Entertainment banner. The film had hit theatres on July 15, 2011.