While the film hasn't been officially titled yet, it is an adaptation of Paula Hawkins' 2015 bestseller, 'The Girl on The Train'.

New Delhi: Actor Parineeti Chopra is soon going to step into the shoes of her character from The Girl on the Train, and to begin with, the actor is looking forward to a change in her hair colour!

Sharing her new decision on Instagram, Parineeti posted a picture of her from a hair salon, looking all prepped up for the new look.

“Changing hair colour peeeeeeps! Time to become the Girl On The Train (and Kanta is really hassled about the state of my hair,” the 30-year-old captioned the picture. 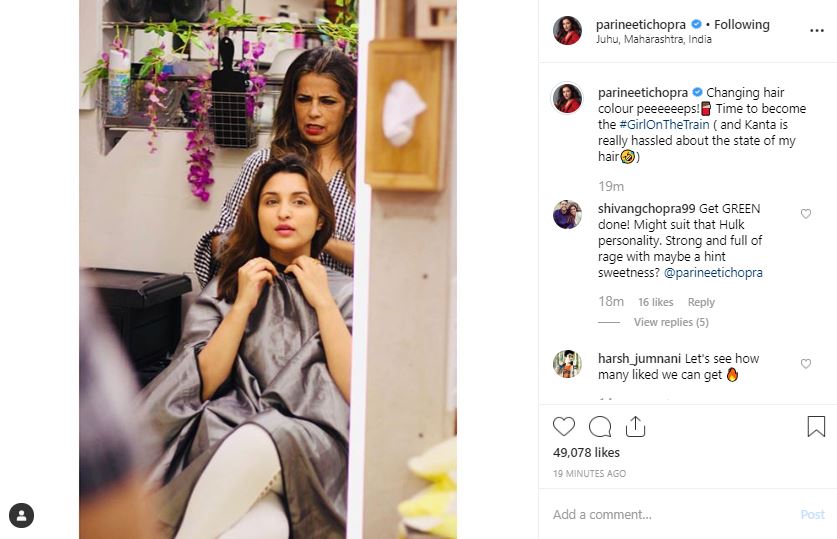 The ‘Hasee Toh Phasee’ actor’s recent post comes after she gave an insight into her jam-packed schedule on July 9.

Continuing to give social media followers her life updates, Parineeti Chopra posted an Instagram story, letting her fans know about four major things she’s busy working on these days, including shifting her house.

“3 weeks left for Jabariya Jodi to release. 3 weeks to start shooting girl on the train. Saina Nehwal training going on simultaneously because I finish GOTT and start shooting immediately! Shifting my house this week. JJ promotions, GOTT prep, house shift- all in 3 weeks! Guys I’m dying of nerves,” she wrote.

Parineeti is about to start the shoot for The Girl on the Train in three weeks. Although the film hasn’t been officially titled yet, it is an adaptation of Paula Hawkins’ 2015 bestseller of that name.

The actor will reprise the hugely acclaimed role of the protagonist essayed by Emily Blunt in the Hollywood adaptation of the film, which is eyeing a 2020 release.

Currently, she is awaiting the release of her upcoming film alongside Sidharth Malhotra, which is set to hit the theatres on August 2.

Also Watch: BJP MLA’s Daughter Says Father Is Out To Kill Her After She Married Dalit Boy